An English translation of this text can be found at the end of this page. 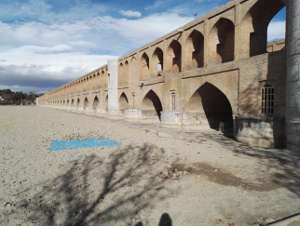 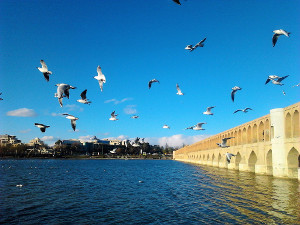 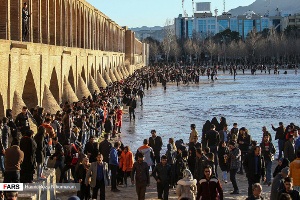 The Middle East and North Africa (MENA) water challenges are intensifying. Poorly adapted governance structures and distorted incentives mean that these challenges are largely left unaddressed and actions and policies are not sustained (World-Bank & FAO, 2018).

The Zayandeh-Rud river is the principal and the largest river of the central plateau in Iran. This river originates in the eastern flanks of the Zagros heights and the high mountains of Zardkooh Bakhtiari, and after passing the 300 km of river course ends up in the Gavkhuni Salt Lake, a marshland internationally acknowledged by the Ramsar Convention and an important stepping stone for bird migration, in the east of the basin. This river basin with an area of 26,917 km2 is located between the 50o 24′ to 53o 24′ longitudes and 31o 11′ to 33o 42′ latitudes. The annual precipitation varies from 1,500 mm in the west to 50 mm in the east of the basin. The long-term average rainfall of the Gavkhuni basin is 268 mm.

This river passes several agricultural and urban areas, including the populous city of Isfahan – the former capital of Iran – whose historical buildings are famous for its Persian-Islamic architecture and were declared UNESCO world heritage.

This basin is the most sensitive catchment in Iran from a political and social point of view; the main supplier for drinking water to a population of over 4.5 million in three provinces of Isfahan, Yazd and Charmahal-Bakhtiari; provider of agricultural water for over 200,000 hectares, supplier of water to several largest industries and the hub of tourism in the central plateau of Iran. This river used to have significant flow all year long, but today runs dry due to water extraction before reaching the city of Isfahan. In the early 2010s, the lower reaches of the river dried out completely after several years of seasonal dry outs.

The steady growth of the region, coupled with the onset of climate change, have taken their respective tolls, leading to increasing water management challenges. While water demand rises, the Zayandeh-Rud’s water resources decrease and with them the livelihood of people especially in the east of basin and important ecosystems dwindle. As the gap between water availability and water demand grows, the different water users increasingly compete for the scarce resource (Mohajeri & Horlemann, 2018).

Before 2005, water resources management was based on the basin’s boundaries and implemented by the authority of Isfahan Water Organization (located in Isfahan city). After the approval of the Law of Independence of Provincial Water Affairs in 2005, the basin was governed based on provincial and administrative boundaries. In 2014, The Supreme Council of Water decided to establish the Zayandeh-Rud Basin Commission for better coordination and planning across the whole basin and to endorse major policy directions and planning outcomes. The commission would set the bulk water shares that each sector/province is entitled to divert and would monitor water use at the higher provincial level.

The main challenges for the water governance system of the Zayandeh-Rud catchment is the lack of horizontal and vertical coordination among the decisions of relevant bodies especially between Isfahan and Charmahal-Bakhtiari provinces, which has caused the unconventional competition for greater share of the basin’s water resources, the incitation of public opinions and the intensification of the social gaps and the high susceptibility of the region to social unrest and tensions.

Against this backdrop, the STEER team with the close collaboration of Isfahan University of Technology investigates the decisive factors for successful intersectoral coordination crossing administrative and spatial levels, as well as their role for integrated and adaptive water management in the Zayandeh-Rud basin