The uMngeni river basin is situated in the southeast of South Africa. The basin covers approximately 4,400 km² and is home to roughly 6 million people. The majority inhabit the cities of Durban/EThekwini and Pietermaritzburg/Msunduzi. Within the river basin, a variety of activities contribute to a mosaic of pressures that impacts on water quality and quantity. Despite well-formulated, formal water governance rules, water management in practice struggles with the magnitude of these pressures and the lack of human and financial capacities.

A view from the upper catchment towards the midlands area. © Evelyn Lukat

The catchment hosts a diversity of ecosystems. The uMngeni river emerges from the foothills of the Drakensberge from the uMngeni Vlei, an extended wetland system. It passes through areas of indigenous thorn acacia forest and savannah before reaching the lowest region where remnants of mangrove forests can still be found in the estuary in Durban. The climate in the catchment is highly variable with the mean annual precipitation ranging from 410 to 1,450 mm. The El Niño phenomenon, that every other decade leads to droughts, made the catchment experience a three year long and still ongoing drought. Water use is close to exceeding water supply, which is why a water transfer scheme has been developed that transfers water from the Mooi river system to the uMngeni. This is also why no further water licenses are being issued, i.e. the catchment is ‘closed’. Climate change might exacerbate the water scarcity situation in the future.

Land use and resulting pressures on water resources

Land use in the river basin varies with river basin conditions. In the upper catchment, land use is mainly agriculture with vast grazing areas and forestry. Although trees in the upper catchment contribute to erosion reduction and flood control, forestry is considered a stream flow reduction activity (SFRA), requiring water licenses. An alien invasive tree species, the black wattle, has spread throughout the catchment. It abstracts large volumes of water from the scarce resources available and, moreover, is deemed to be a severe threat to wetlands. Research has shown that especially in low flow periods the impact of alien invasive species on water availability is significant. The uMngeni is dammed in Midmar dam, which is considered the most important drinking water reservoir of the upper catchment. At the same time it is an area that is key to recreation and tourism for the province. Agricultural as well as domestic pollution are severely impacting on the water quality of the reservoir. 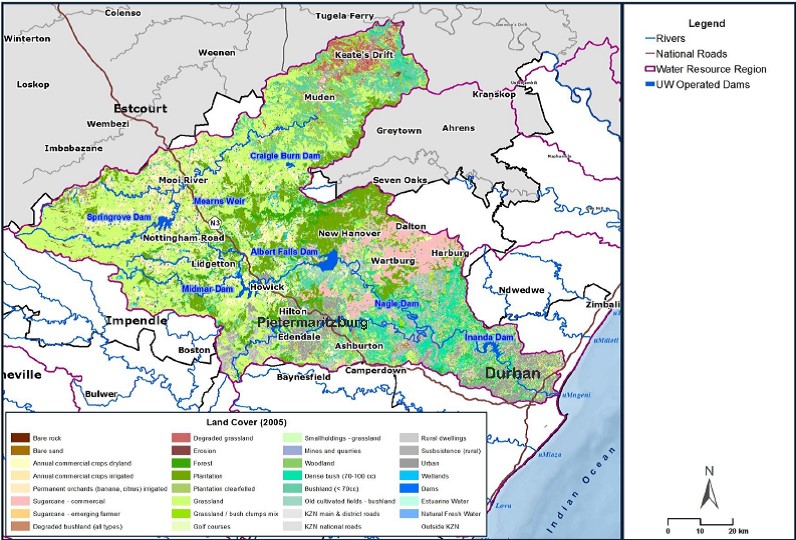 Downstream of the uMngeni Vlei, in the midlands, mainly sugar cane production and forestry take place. In the middle stretches where the municipality of Pietermaritzburg is located and the important Msunduzi tributary enters the uMngeni river, pressures on water resources are resulting from the urban sprawl and occasional industrial effluents. This is also true for the downstream stretches of the uMngeni, i.e. the municipality of Durban. Lacking or deficient infrastructure for waste and drinking water not only threatens river health but also human health. In the Msunduzi sub-catchment, the situation is exacerbated by the high population density and resulting intensive land use. Owing to severe social inequality in the overall catchment of the uMngeni, the rate of illegal water abstractions is high, which, in turn, makes water demand management a challenging task. 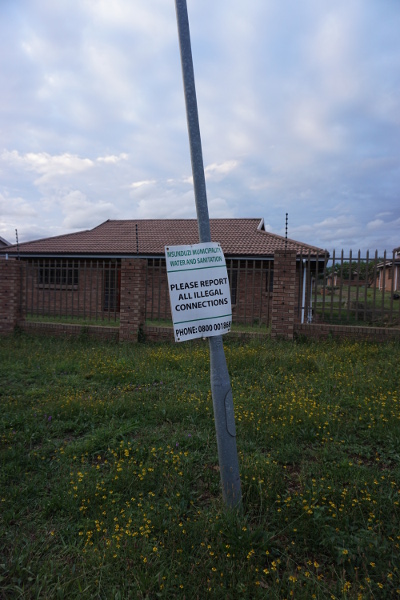 In the lower reaches of the river, the results of the accumulated pressures occurring in the upper and middle catchment can be seen. Inanda dam shows increased nutrient pollution, at times resulting in algal blooms. The high sediment transport caused by erosion due to agriculture and forestry is further exacerbated by mainly illegal sand mining that erodes river banks. In the estuary in Durban, sediment together with litter slow the flow of the river and have at times closed the river mouth to the sea. This demonstrates that littering in the catchment is a severe issue, also causing blockage of waste and storm water pipelines that result in overflows and flooding.

Littering is a severe problem in the catchment. River mouth in Durban. ©Evelyn Lukat

South Africa adopted one of the most advanced water legislations worldwide in 1998. Twenty years later, the implementation of several key aspects is still deficient. As the National Water Act has been very ambitious, capacities needed for implementation are lacking. One example is the establishment of Catchment Management Agencies (CMAs). Initially, there was one CMA planned for each one of the 19 Water Management Areas in the country. After a long and resource-consuming stakeholder participation process, the number was reduced to nine CMAs. In December 2018, the Department for Water and Sanitation gazetted a business plan to establish just one CMA at the national level; this Gazette is currently under public comment, a final decision is envisage for end April 2018.

Due to inadequate implementation including the often movement of goals of higher-level water governance and management, uncertainty remains for the actors at the lower water governance levels. The lack of leadership has been compensated by various formally established water institutions such as Catchment Management Fora (CMFs) but also through informal networks like the uMngeni Ecological Infrastructure Partnership (UEIP). However, a misfit remains between having a legal mandate for activities in water governance and management and the capacities and willingness to act.

Many activities at the planning and implementation level, but also on the operational level, such as upgrading urban water infrastructure or pipe fixing, pose a challenge to the capacity of authorities, not least due to lack of funds due to systemic corruption. NGOs and the UEIP support the authorities, e.g. by carrying out activities such as leak detection as well as integrated catchment planning, activities that these organisations are not mandated for. Hence, there is a high degree of self-organisation in the catchment, which can also be observed in the CMFs. These fora were planned as spaces for public engagement and co-production of knowledge in order to strengthen good water governance. Today, they combine a variety of local stakeholders that get together to update each other with formal and informal monitoring outcomes, issue complaints and undertake actions for environmental protection, e.g. clearing the area from invasive alien species or litter, as well as discussing strategic aspects of water resources management and reporting these through the official channels of the Department.

As the uMngeni river basin is situated in KwaZulu-Natal, traditional leadership plays an important societal role in the region. In order to cope with illegal sand mining, littering and spatial planning of settlements, traditional leaders are important for coordinating with authorities and community members. The formal governance framework includes traditional communities and their leaders, but their participation in non-statutory or voluntary organisations is still limited. Agriculture, as one of the key pressures in the catchment, is not yet sufficiently integrated either. Agricultural stakeholder are organised in Irrigation Boards or Water User Associations, which are parallel structures to the CMFs where other stakeholders organise. The agricultural sector has demonstrated its willingness to participate in water governance as the active participation of agricultural players in the UEIP proves.

The uMngeni case study in STEER

The STEER project applies a co-development process, in which the analytical work is validated through feedback loops with local stakeholders on at least three occasions during the project lifetime. For the uMngeni case study, the project supports the filling of existing deficits in horizontal and vertical coordination among governance bodies. Together with uMngeni stakeholder, we aim to identify existing forms of collaboration that allow the inclusion of stakeholders who currently do not take part in water governance and management. We aim to utilise the capacities of the available fora in order to strengthen addressing lower level needs in higher level policies. Through the project’s collaborative process we also aim to enhance local capacities for adaptive and integrated water resources management. Due to close collaboration with the University of KwaZulu-Natal, the project has opportunity to engage a UKZN Master’s student.

Workplan for the uMngeni case study